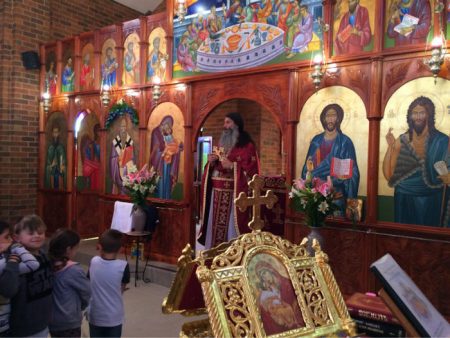 To some who were confident of their own righteousness and looked down on everyone else, Jesus told this parable: 10 “Two men went up to the temple to pray, one a Pharisee and the other a tax collector. 11 The Pharisee stood by himself and prayed: ‘God, I thank you that I am not like other people—robbers, evildoers, adulterers—or even like this tax collector. 12 I fast twice a week and give a tenth of all I get.’

13 “But the tax collector stood at a distance. He would not even look up to heaven, but beat his breast and said, ‘God, have mercy on me, a sinner.’

Through the example of the tax collector and the Pharisee we can see two models of spiritual life.

One of them, the Pharisee, is pious, fulfills the law and is righteous, the other – the publican, is a sinner, breaks the law and does not regularly go to church.

One of them enters the temple and prays and shows off like this: I am such and such, I fast like this, I give away like that, I am not a sinner like others and thus preoccupied with his vanity and self-complacency cannot notice that he is actually judging others, underestimating them, humiliating and in the end condemns a concrete person by saying: “and not like this publican here”.

On the other hand, the publican enters the temple considering himself unworthy, and he sitted on the end of the temple and does not even lift his head towards the sky, but hits himself in the chest and says: Forgive me Lord, be merciful to me, a sinner. Illumined because of his humility he realizes that God is the only good and merciful, while we are all sinners and we need to humble ourselves and seek mercy from Him.

Which one of them exits the temple more justified. The answer is, the second one.

He was justified because he realized his mistake, he came to church to confess, he repented and changed his life, setting a healthy and repenting foundation. The tax collector did not have high opinion of himself, although he might have been healthy, handsome, rich, smart…, but he considered his deeds abominable before God.

The first one, was indeed pious. His mistake is that for all his virtues he considered himself creditable and not God, Who said that without Him we are not able to do anything and each perfect gift comes from the Father in heavens. We have no thing in our possession on earth. Everything that is ours is God’s, and God wants to give it to us. If we do not have help and blessing from God, we cannot do anything. Therefore we need to thank God, and not boast.

The devil does not rest. He tries in all possible ways to attack and deceit people so that they may sin. The devil’s deceit for those that fulfill the law and are pious (go to church) are the so called temptations from the right. He makes for them a great image, makes them complacent and criterion for everything, darkens their minds, hardens their heart and makes them fierce in their hearts, so that all those who are not like them and do not think the way they do are despised, judged and condemned by them. In that case, they get nothing from their zeal, fasting, prayer and going to church.

Such people place themselves and not Christ in the center of their lives. Our life is Christ-centered and cross-centered. Christ is the absolute Truth and criterion for everything and He is the center of our lives, not us or man. Unconsciously they deify themselves and elevate to the level of deity, idol, and thus they take God’s throne. Such a big sin is self-love.

The moral is that we are not to judge by the outwards appearance, by how people look like and how they live. Every sin comes from the devil, from the enemy. Therefore we, as loving beings, should not be joyful about and judge those who sin, we should not attack them, or underestimate them, or hurt… If we act like that, we show by our deeds that we have nothing in common with Christ. We always should have love in ourselves.

What is happening in the life (heart) of the other, our fellow, we do not know, only he and God know that. We need to express love and love our neighbor, no matter who he is, how he looks and how he lives.

This happens because the foundation of spiritual life is not repentance and humble mind before God, but vanity and pride, self-boasting, self-complacency and making oneself self-important.

If we do not have repentance, all we do is a delusion. If prayer is not in the repenting spirit, it is a delusional prayer. We utter a great number of prayers, our mind flies around, fills with vanity, and the demon gets stronger.

The demon is a great boaster and rubberneck. The moment he notices a bloated and empty mind immediately he starts attacking it by thoughts and illusions. He who is proud and non-discerning, will never suspect and confess his thoughts, he will trust his thought and thus he will fall into a trap. Only the humble mind is given the light to rightfully discern the thoughts and recognize the satanic traps. The fear of God does not protect us from every evil.

Also the zeal without repentance is nit by God. To the self-complacent people the devil himself gives zeal in fulfilling the norm of the Church, but if we exclude their pride and stubbornness we will easily see where they stand.

This is an incorrect entering the Church.

That is why the first sermon of our Saviour Lord Jesus Christ and to Saint John the Forrerunner and of the Holy Apostles is about repentance.

Without repentance amd humbleness  there is no salvation.

He who humbles himself will be exalted and who exalts himself will be humbled   and therefore God allows temptation to the proud one in order that he may break his pride, humble and thus save his soul.

In the Kingdom of God there is no place for the proud ones.