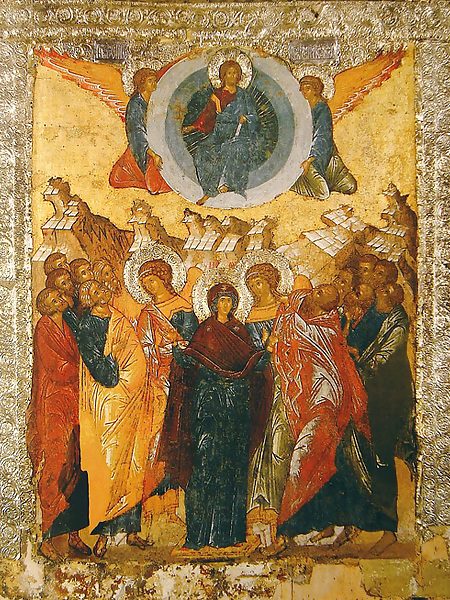 In the name of the Father, the Son and the Holy Spirit

After the Lord Jesus Christ was crucified on the cross to redeem our sins and deliver us from death, in the third day He was raised from the dead. Destruction (Hell), could not keep in capture the One who has power over life and death and the one who is the creator of everything, the true God. To show the truth of His resurrection and to show that He is the expected and the promised Messiah, He proved His resurrection by appearances; firstly to the blessed Mother Mary, then to the myrrh-bearing women, the apostles and all the others that He chose to show himself to.

Once he rose with the power of His Deity on the fortieth day, He ascended to heaven where He came from. He ascended with the same body that he received from the Blessed Virgin Mary, but deified and spiritual, to bestow human nature with the greatest dignity and honor to sit on the right hand of God, the Father. That is, the Son of God, by the favor of God, the Father, He incarnated and became man, to unite heaven and earth, and through His body to raise our fallen nature, which was previously created to be deified and to participate in God’s nature, in the Kingdom of God. Because of the deviation of our first parents Adam and Eve, their sin and their passions of this world, they could not fulfill the Principal; therefore mankind has fallen in the mud of passions and sin and became bound by them, from death and the devil.

Our ancestor Adam closed the door to the Kingdom of Heaven and a cherub with flame weapon was set before the door. But the love of God could not see His creation to suffer. For God so loved the world that He gave His only begotten Son, that whosoever believes in him should not perish but have eternal life. (John 3:16) The Word of God was incarnated and became man, and again, God gave man the opportunity to be deified and become god by grace. Adam’s sin, closed the heaven and the road to life, and opened the road to death and hell. God Jesus Christ, the new Adam, did the opposite. Because He did not sin, defeated Satan, death and destroyed the prisons hell, and He opened the gates of Paradise who will never be closed. And its gates will not be locked during the day because there will be no night. And I will bring glory and honor of nations, and will not allow anyone dishonest to enter, anyone who makes things filthy and lying, but only those listed in the book of life of the Lamb. (Otkr. 21:25 – 27).

When God Jesus Christ made the saving Dispensation, on the fortieth day he ascended to heaven, to open the way of the Holy Spirit to come down and make a real opportunity for worship. God Jesus Christ ascended to heaven but He did not leave us alone. He promised the Comforter, the Holy Spirit and this is why our hearts are filled with joy. But I tell you the truth: It is for your good that I am going away. Unless I go away, the Counselor will not come to you; but if I go, I will send him to you. Truly, truly, I say to you, you will weep and lament, but the world will rejoice. You will be sorrowful, but your sorrow will turn into joy. (John 16:7).

At the Pentecost (an event that follows) the Holy Spirit established the Church and through the Holy Spirit we all become one Body of Christ. The Church became our home and place to live and we can take part in the Divine energies and receive Holy Communion with God through the body and blood of Christ that He has left to us as real food and real drink. 53 And Jesus said to them, “I tell you the truth, unless you eat the flesh of the Son of Man and drink his blood, you have no life in you. 54 Whoever eats my flesh and drinks my blood has eternal life, and I will raise him up at the last day. 55 For my flesh is real food and my blood is real drink. 56 Whoever eats my flesh and drinks my blood remains within me, and I within him. 57 Just as the living Father sent me and I live because of the Father, so the one who feeds on me will live because of me” (John, 6 53-57).
The Ascension of Christ is a very important event in the history of all mankind. If He did not ascend and sat on the right hand of the Father, then the Holy Spirit, God, would not come down to the Apostles, and through them and the Holy Fathers and to us today in the Church, we would still have no access to God and God’s Kingdom.

Therefore, since Christ – the Head of our salvation performed the mystical Providence– He raised the fallen human nature from the earth, from the fall and death to eternal life in heaven. Pre deifying the human nature to its highest degree with His Ascension, God made us able to receive the Holy Spirit.

God ascended to heaven to advocate for us before God, the Father, said St. John the Theologian: 1 My little children, I write this to avoid making a mistake, and if anyone sins, we have a representative to the Father, Jesus Christ the righteous;
(Jn.2, 1-2) Christ Jesus died for us and was raised to life, and he is sitting in the place of honor at God’s right hand, pleading for us (Romans 8:34).

God opened the way to the kingdom of heaven and the way to God and salvation. It is up to us now, with our strength, willingly accepting the gospel, God’s commandments and what God has allowed in our life, living good deed life in the Church, to be participants in God’s nature, to be ascended in the kingdom of heaven and to be what God created us for. As St. Paul, was ascended in a body, in the third heaven, by the grace of God and Providence, because of the excitement he never knew whether he was in a body or without body, saw unspeakable things, felt what man can not feel it, seen what the human eye can not see and human mind can not understand, that is what God has prepared for us.

With the Christ’s ascension into heaven, the sky remained forever open to man, as a new and eternal home. St Athanasius the Great said- “God became a man, for man to become God.” God came down the earth for us so we can ascend to heaven!
Well this is the content of Ascension Day! – The Ascension is open for us, and we are called, and I found purpose in it, the meaning of my life and joy. “That’s the truth about the world and man; it is here what God calls us from eternity for”. Christ opened and granted the heaven to us, through himself He pointed out the meaning of life as ascetic, struggle, progress, climbing, ascension and deification.

So brothers and sisters, we should not be deceived by the pleasures of this world, that seem nice and sweet, but in reality pleasures cause suffering. Pleasures look as a decorated balloon but when it’s going to burst, all its size and beauty will disappear in a moment. Then we realize that our life was spent in vain and lies and then we will weep and cry. But we should be aware, while there is still enough time that we should make every effort for the kingdom of God because it’s worth it. May God give us strength to endure in our deed until the end. Amen.