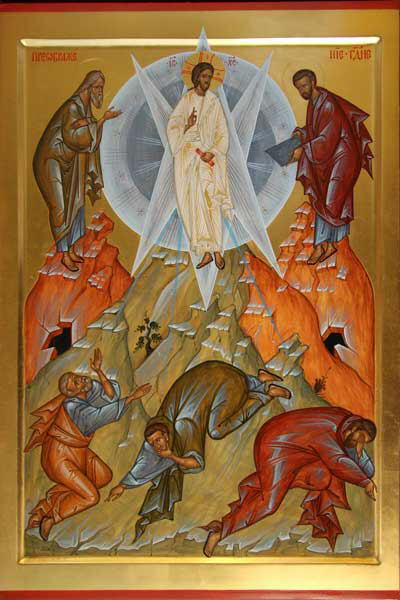 On this day the Holy Orthodox Church celebrates the memory of  Christ’s Transfiguration on the mountain of Tabor before the eyes of the apostles, which in its essence is their transfiguration as well. Namely, this is the event from the Holy Gospel into which is described how our Lord before undergoing His glorious passion, climbed alone on the mountain, and took with him Peter, James and John, and prayed all night on his own. Then He transfigured, His face and even His clothes were brighter than the day and the sun. Then God opened the spiritual eyes of Peter’s , James’ and John’s minds so that they could partly see the glory of God; not being able to endure Christ’s Godly glory they were afraid and fell down on the ground. On this event were present Moses and Elijah, talking about the forthcoming events.

This event was shown by our Lord Jesus Christ in order to ensure His disciples, to ensure all mankind until the present day, that He is the true God Who before all times was begotten by the Father and in the time was born by Virgin Mary and accepted human body and became man, perfect God and perfect Man. His human body, like a curtain hid His Deity and that is the reason why we, as people, were able to talk with Him and be in His company as with a man. But behind His human body His deity was hidden and when the Transfiguration happened, in fact there was no change within Him, but at that moment the apostles were enabled to see His Deity.

Through His Transfiguration our Lord showed us that the events to follow: His passion, The Cross, the descent into Hades and the Resurrection are real and true and are predicted by God for our salvation. Our Lord chose these three apostles to be the witnesses of His Deity and to testify for Him so that by his testimony we could be able to believe that Christ is the true God and our Saviour.

These three were chosen because they were a bit more zealous and more prepared than the others, and because with the apostles was  Judas, who was not deserving to participate in this event, so our Lord in order not to leave him alone and make him suspicious and thus be justified for his betrayal, left the rest of the apostles with him. He chose only James, John and Peter also as a depiction  of the the three virtues – faith, hope and love. Peter represents faith, James – hope and John represents love.

With this event our Lord revealed to us the secret of the Church as a community. Its eternal character and limitlessness. Everything in life, or more precise, in the Church is centered toward Christ, Christ is the head of the Church, and around Christ everybody is gathered together, both alive and dead.

And in the same manner as our Lord climbed to the mountain of Tabor, we are supposed to climb the mountain of our heart, I.e. we should be vigil;ant over our heart and through acquiring virtues we should leave the passions of this world. Above all, doing these three main virtues  – faith, hope and love. Through this we gradually cleanse our hearts from the passions, we cleanse ourselves from sin, faithlessness, doubt, anger, unlove, hatred and we enlighten ourselves,  thus we also free ours hearts, and enlighten our minds and our entire being becomes transfigured. Thus we are able to take part into and accept the grace of God and be participants in the Godly nature, i.e. become gods by grace. In the second and third centuries, first St. Irineus of Lion and later St. Athanasius of Alexandria said: God has become man so that man can become god.

In the 13th century some western theologians and monks Varlaam and Akindin, who mistakenly understood the faith, by means of rationalizing it and giving more importance to the the rationalistic than to the spiritual, could not understand that the energies of God are uncreated, as  result of which there appeared the heresy that was spreading and bacame a serious danger   for Orthodoxy and the orthodox ascetics and spirituality. They were claiming that the energies of God are Godly creations,  and do not belong to His nature therefore we could not be participants and receivers of these energies of God.

Here the greatest and most zealous defender of the orthodox faith was St. Gregory Palamas, who is considered the greatest of theologians. He systematized all theology up to that time and wrote three words in defense of the holy hesychasts, into which is said that hesychasm, i.e. prayerful silence, the ascetic struggle is necessary for us, because in that way we cleanse our hearts from the passions and we enlighten our mind, which prayerfully descends into the heart as in its essence and home and through the uncreated grace of God our person is deified.

If we consider ourselves true Christ’s disciples, if we are genuine Christians, we should live a true Christian life and we should truly listen to Him and love Him, i.e. we should truly believe in God. Through fulfilling His commandments let us confess Him, and in that way we shall fulfill His providence for us and our ordination to be sons of God, gods by grace. Amen.