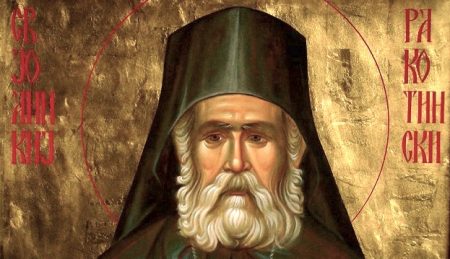 You cannot hide light that is at the top of a mountain, and you  do not put it under a bushel, but on a candlestick, and it gives light to all that are in the house (Mat. 5: 15).

The life of our venerable father Joanikij is as much hidden as it is revealed. The information about his life is insufficient. It is known that he was born in 1839 in Ohrid, and according to some people he was from Aegean Macedonia. He died on 24th January 1941 and his relics are placed in the monastery of Saint Nikola in the village Rakotnica near Skopje, which is situated on the hillside of Vodno, 10 kilometres away from Skopje. On his baptizing he got the name John (Jovan Georgiev).

His wish to devote himself fully to God’s service, lead the young John (when he was 30 years old) to the monastery of Saint Pantelejmon in the village Nerezi in Skopje. This decision of his was probably a result of his memories of the monks in the monastery of Saint Pantelejmon, who usually visited Ohrid, as well as the high spiritual level of our people in the past. In this monastery, where there used to be a big monastic brotherhood, he spent two years as a novice, after which he was made into a monk and received the name Joanikij. In the monastery he stayed as a monk for another two years. His service in the monastery of the Holy unmercenary healer Saint Pantelejmon left a part of his graceful life for ever. In his later life serving the people of God as well as the heterodox people, he equally took care of their spiritual as well as physical health healing them with herbs and prayers. He even wrote a book called “Lekarusha” (Medical Book), which is today kept in the Church archive of the Faculty of Theology in Skopje. There were also numerous healings that happened after his prayers where the natural medicines could not help, while he guided himself by Christ’s order: You received free, you give free (Mat. 10; 8).

Father Joanikij spent the next three years in the monastery of Saint Dimitrij (Dimitrius – Marko’s Monastery). In 1875 father Joanikij, probably already a hieromonk, together with the local villagers from the village Rakotnica started rebuilding the monastery of Saint Nikola, which had several times been ruined during the time of the Turks. The news of the restoration of the monastery embittered the Turkish authorities; and Joanikij, in order to avoid the anger of the Turks, and not to provoke troubles and evils in the village, left the monastery to go to the Holy Mount for a short period. For the same reason he came back to do the restoration several times, occasionally leaving for the Holy Mount until the passions come down. However, with the persistence and the zeal of a man with a strong faith and a clear vision, he succeeded in finishing the restoration of the monastery. Next to the Church of Saint Ilija (Elijah), they later built the monastic houses. In this monastery, father Joanikij was made into an archimandrite, where he lived for another 63 years until he venerably reposed in God in 1941, in his 102 years of age. Father Joanikij was short and plump in his face; he was a meek man with a sweet soul and soothing words. The rest of the knowledge about him is the witness that in the last 63 years, “the archimandrite Joanikij was very modest and did not ask for any help for himself, except if there was the need to help the monastery”. As usual, people know very little about his monastic exploits and as far as his spiritual growth is concerned there is the fact that he was the priest who confessed the Metropolitan of Skopje at that time Varnava (Barnabas), later a Serbian Patriarch. The Metropolitan of Skopje once told him: I am an Episcope in rank, but you are an Episcope in deeds.

The villagers remember him for his good deeds. He was the most educated man in the area, and people used to visit him for advice even from the most remote villages, he was the most favourite among the Christians, but even the Turkish Asker respected him. The Christians used to call him Elder Hadji (Pilgrim) because he had gone to Jerusalem on pilgrimage, to pay respect to the Tomb of our God and Saviour Jesus Christ.

As a true Shepherd and spiritual healer, he took care of the souls and the bodies of his spiritual flock. Apart from the fact that he confessed them and spiritually taught them and lead them on the spiritual road of salvation, he also founded a school in the monastery in 1896, where he intellectually educated them, and was a teacher to them himself, at first teaching only boys, but later girls as well. The archimandrite did not give the children only secular knowledge, but he also used to place a healthy foundation in the children’s hearts for the Word of God, most of all with his personal example and the never-ending prayer for them all.

He often advised them using his knowledge of the Holy Scripture as well as his gift of perspicaciousness revealing them the weather conditions for work and he often advised them and revealed saying: “People listen to me, what kind of period is coming, what does the Gospel say? Firstly the elms will wither, then the waters will disappear, there will be wars, respect the Church feast days, and don’t tell on your neighbours…”

Inflamed by their love towards God, some of them later took monastic vows. One of them Spaso, with monastic name Sofronij (Sophrony), who was from Rakotnica, served in the monastery together with the Archimandrite. Together with father Sofronij, they regularly served the whole liturgical cycle apart from the many worries and occupations around the field work on the monastery property of which he took care himself. Another one, Makarij, later became an abbot of Marko’s Monastery. The nun Antonija is also known. The villagers still remember that he was the one who built the first mill in the village, “which worked by the power of one horse”.

He lived in the monastery until he gracefully reposed in God on 24 January 1941, which, as with many other holy men, was revealed to him by God, as well as for the subsequent events with his relics. Before he reposed in God, on the place where he abided, he started to dig his grave alone, and when the villagers begged him to help him with the digging he used to reply with the words: “It is for me personally, I will make it myself”.

However, according to the words in the Holy Gospel, that a light at a top of a mountain cannot be hidden, so it happened with the personality of the venerably reposed Elder Joanikij, who, with his devoted life, living hidden in his secret room i.e. in his heart, went through all three levels of spiritual life. The first one is the level of the zealous struggle against the heart and its purifying from passions, as well as its liberating. The second one is the level of enlightening the mind, where in the already purified heart, through prayer, the mind of the zealot descends into it and bathes and enlightens itself there with the enlightening grace of the Holy Spirit. And the third level is the deification of the whole personality where not only the soul but the body itself is enlightened and deified and cannot see decay. It happened so with Saint Joanikij of Rakotnica, whom, after his venerable repose in God, the earth could not hide and his whole body was ejected out of the earth for the glory of God. About 30 years after his repose, his holy and non-decaying relics in a miraculous way were ejected on the surface. The parochial priest devotedly and with all honours washed and anointed his holy relics, and because of the ignorance of the villagers and the fear of the communist authorities brought the relics to another grave which was near one of the village churches, from where, later again, because of the improper behaviour towards him, his non-decaying body was brought back to the old grave, and was now covered with three stone slabs. On the third one there was an opening from which the preserved face of the venerable elder could be seen.

But in this third grave as well as in the other ones, the body of the holy elder was left to carelessness and improper care so that exposed to the weather conditions started to decompose. For that reason, at present time, father Fotij, the abbot of the Monastery of the Holy Mother of God in Berovo, together with several faithful people, dug it out, anointed it again with chrism and laid it back into a new and protected grave. Even today you can feel the divine scent coming from his holy relics, which proves the sacred life of the elder.

Nowadays, while our people are waking up from the spiritual sleepiness of atheism, the consciousness and the respect for our holy man also wakes up, this saint who is the proof of the continuing and never-ending grace of the Holy Spirit in our church. More and more faithful people become interested in the life of elder Joanikij and their pilgrimage to his grave. And in the Monastery of Saint Nikola in Ljubanci, his first icon was painted.

After his holy prayers, Lord Jesus Christ, have mercy on us!