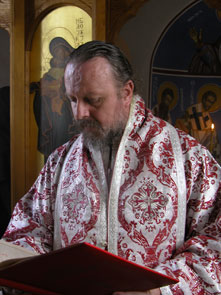 We overcome each temptation—from big to small—always in the same manner: first, we accept is as a God’s gift; second, we thank God for that; third, we condemn ourselves as worthy of even worse than what is happening to us at the given moment; fourth, we do not show (externally) to the demon, neither by our facial expression, nor by word, nor by any action that we are being tempted; fifth, we continue with our prayer not as fighting against the temptation, but as building union with God.

How does the inappropriate confrontation with a temptation look like or in what way does our fall happen when tempted? First, we do not accept it as a God’s gift; second, we do not thank God for it; third, we do not condemn ourselves as worthy of even worse than what has already happened to us; fourth, we do show (externally) to the demon either by our facial expression, or word, or some action of ours that we are being tempted; fifth, if we even think of prayer, we take it as fighting against the temptation. Naturally, time and struggle of self-exerting are necessary to learn to act appropriately at the hour of temptation, because we are spiritually ill, that is, the bad habit has become our second nature. Hence, virtue is usually not acquired at once and we are not to be discouraged by that.

What do we perceive by the appropriate way of overcoming temptations? First: that it brings us repentance and mourning as well as spiritual joy, and not delusion (desperation or euphoria, etc.). Then: that the problem is never outside us, but always within us—either in our attitude or relation towards everything happening to us; that the appropriate overcoming of temptations is the same as seeking God’s justice and not human; that only by appropriate overcoming of temptations do we undergo a process of transforming of our passions, rather than suppressing or satisfying them; that in this way we do not give the demon neither material nor right to bother us in our prayer; that in such a way we avoid self-justification and acquire self-condemning; that the only way to change the world around us is to change ourselves first. And finally, in this way we avoid the trap of self-observation (whether I feel good or bad), which is a result of our self-love which defines our complacent behavior, thus directing our existence only to the glory of God.  Acting or not acting according to the right way of overcoming a temptation should be the content of our confession, as well as a way of our re-examination.