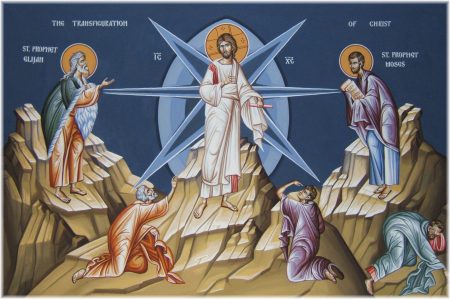 Forty days before He was delivered to an ignominious death for our sins, our Lord revealed to three of His disciples the glory of His Divinity.

“And after six days Jesus taketh Peter, James, and John his brother and bringeth them up into a high mountain apart; and was transfigured before them: and His face did shine as the sun, and His raiment was white as the light” (Matt. 17:1-2). This was the event to which our Lord was referring when He said, “There be some standing here which shall not taste of death till they see the Son of man coming in His Kingdom” (Matt. 16:28). By this means the faith of the disciples was strengthened and prepared for the trial of our Lord’s approaching passion and death; and they were able to see in it not mere human suffering, but the entirely voluntary passion of the Son of God.

The disciples saw also Moses and Elijah talking with our Lord, and thereby they understood that He was not Himself Elijah or another of the prophets, as some thought, but someone much greater: He Who could call upon the Law and the Prophets to be His witnesses, since He was the fulfillment of both.

The three parables of the feast concern the appearance of God to Moses and Elijah on Mount Sinai, and it is indeed appropriate that the greatest God-seers of the Old Testament should be present at the glorification of the Lord in His New Testament, seeing for the first time His humanity, even as the disciples were seeing for the first time His Divinity.

The Transfiguration, counted by the Church as one of the “Twelve Great Feasts,” had an important place in the Church calendar already in the fourth century, as the homilies and sermons of such great Fathers as Saint John Chrysostom, Saint Ephraim the Syrian, and Saint Cyril of Alexandria attest; its origins go back to the first Christian centuries. In the fourth century also, Saint Helena erected a church on Mount Tabor, the traditional site of the Transfiguration, dedicated to the Feast. Although the event celebrated in the Feast occurred in the month of February, forty days before the Crucifixion, the Feast was early transferred to August because its full glory and joy could not be fittingly celebrated amid the sorrow and repentance of Great Lent. The sixth day of August was chosen as being forty days before the Feast of the Exaltation of the Cross (September 14th, old style), when Christ’s Passion is again remembered.

Orthodox theology sees in the Transfiguration a prefigurement of our Lord’s Resurrection and His Second Coming, and more than this – since every event of the Church calendar has an application to the individual spiritual life – of the transformed state in which Christians shall appear at the end of the world, and in some measure even before then. In the foreshadowing of future glory which is celebrated in this Feast, the Holy Church comforts her children by showing them that after the temporary sorrows and deprivations with which this earthly life is filled, the glory of eternal blessedness will shine forth; and in it even the body of the righteous will participate.

It is a pious Orthodox custom to offer fruits to be blessed at this feast; and this offering of thanksgiving to God contains a spiritual sign, too. Just as fruits ripen and are transformed under the action of the summer sun, so is man called to a spiritual transfiguration through the light of God’s word by means of the Sacraments. Some saints, (for example – Saint Seraphim of Sarov), under the action of this life-giving grace, have shone bodily before men even in life with this same uncreated Light of God’s glory; and that is another sign to us of the heights to which we, as Christians, are called and the state that awaits us – to be transformed in the image of Him Who was transfigured on Mount Tabor.

The Transfiguration is the visual manifestation of God’s Kingdom on earth. Shortly before His suffering on the cross, Jesus Christ, taking along with Him three of His disciples – John, James, and Peter, – left Capernaum and went north towards Mount Tabor, which rose like a citadel above the hills of Galilee. The disciples were silent, having a presentiment that a mystery would be revealed to them. Mystic events take place in silence. The human word bears the same relation to mysticism as a wave to the depth of the ocean.

On Mt.Tabor the apostles saw the divine Transfiguration of Christ, the manifestation of His majesty and glory. The Saviour’s face became like lightning, His raiment – white as snow. He stood encircled by shining brilliance, as though amid the rays of the sun. Two prophets – Moses and Elias – appeared before the Saviour and conversed with Him. Interpreters of Holy Scripture say that they talked of the sacrifice on Golgotha, of Christ’s forthcoming suffering, of the fact that mankind’s sins would be redeemed by the blood of the Son of God and Saviour.

The Lord not only preached His Gospel to the people, but also educated and enlightened His disciples. And gradually He revealed Himself to them as the Messiah not only of Israel, but of all mankind, as the King of the eternal spiritual kingdom. The Messiah’s words that He would be tortured in Jerusalem evoked awe and fear in the disciples. A vision of the crucified Messiah might have evoked the feeling of despair in Christ’s disciples, the thought that everything was irrevocably lost. The mystery of redemption could have appeared to them as a defeat, as the Messiah’s powerlessness. At a time of despondency and doubt, the three apostles’ witness to the Transfiguration was to strengthen the faith of the other disciples.

What constitutes the mystery of Christianity? It attracts people not so much by its delicate and sophisticated intellectualism, nor by the brilliant oratory of its preachers, nor yet by the beauty of its rites. Christianity revealed to the human soul a new world, an eternal world, a world of divine light – that which not a single religion or philosophical system could give.

“And after six days Jesus taketh with Him Peter, and James, and John, and leadeth them up into an high mountain apart from themselves: and He was transfigured before them. And His raiment became shining, exceedingly white as snow; so as no fuller on earth can white them. And there appeared unto them Elias with Moses, and they were talking with Jesus” (Mark 9:24).

Together with Christ three apostles – Peter, James, and John – ascended Mt. Tabor, where the Lord’s Transfiguration took place. It was accompanied by the appearance of the Old Testament prophets Moses and Elias. They spoke with Christ about His imminent departure from earth to rejoin God the Father. The Gospel then speaks of how all of them were overshadowed by a bright cloud, out of which a voice issued, saying: “This is My beloved Son; hear Him.”

The Lord did not ascend the mountain alone, but took three disciples with Him. On Mt Tabor their eyes were opened to a different, spiritual world, and they were able to see the Light which transfigured Christ. After that the Saviour spoke for the first time about His martyric end and resurrection. At that time the apostles did not understand Him, because in accordance with Jewish tradition they saw Christ as a future earthly king and liberator from foreign domination. Christ, however, was preparing for His suffering on the cross and the humiliation of Golgotha, and He showed His Transfiguration to the three disciples, so that they would be able to bear witness to His divine nature and voluntary agreement to torment on the cross.

The essence of the Transfiguration is revealed in its symbols. The mountain is a silent, solitary place which makes it easier to engage in prayer and helps us unite our restless mind with God. The name “Tabor” translates as purity or light. Whoever comes to an awareness of his actions and repents of what he has committed is freed of spiritual uncleanliness and is able to see the divine uncreated Light. Christian teaching sees the spiritual meaning of life precisely in the attempt to acquire this Light and deify human nature.